Aidan was born in Dublin in ’62 and did a B.A. in English and Philosophy at UCD. Since then he has been teaching English in Spain, Germany and Ireland as well as writing code for websites and creating apps for mobile devices.

He has no previous publications but keeps writing because it’s not you who decides when to stop when you dance with a bear. 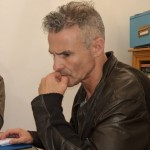 I wake up to night like a hood
pulled over my head
where a scattered militia of stars
and a windfall of rain
veil a cavern of rags and burnt timbers
and gutted remains.
I have come from nothing to nothing,
I have nothing to gain.

The place is a deathtrap,
the floorboards give way,
the neighbours complain.
Tear it down! Put up a sign!
This House is a Hazard!
Keep out! Keep Away!

And every so often some fixture
comes clattering down
when it gives up the ghost. They say
it wakes the whole town.
It’ll wake the dead, they say.
I have come from my grave

to clock metal sweating it out, where a
couple of wires
poke out one end of a handset that
cradles the rain.
From nothing comes nothing, they say,
I have nothing to gain.

I am driven back even now
by the heat of the blaze,
the jets and the squirts, the squibs and the
squeezings of flame
browsing the wood, spreading firedrops and
meteors of paint
as the fault line arrives in the glass with an
ear-splitting bang
and the mirrors convulse with the image they
couldn’t digest,
and the chairs knuckle under, the curtains
slap at their clothes
and the papers, like frightened angels, their
wings turning brown,
bow from the waist as they shrivel and
lay themselves down.

I can’t get too close even now
for the heat of the flames.
Everything buckled and wilted and
who was to blame?
I pick up the pieces, I have to live here, I
remember their names,

amazed, even now, that people
can talk without choking
and the children, who’ve not lost their courage,
at all costs keep talking.
I have come from nothing to nothing,
the trail has gone cold

and dawn blinks on like a striplight over the derelict world.