Rue Baldry lives in Yorkshire, Great Britain. Her previous short stories have been published in journals such as Litro, MIR Online, Ambit, Postbox, The Nottingham Review, The Incubator, Mslexia, and The Honest Ulsterman  and shortlisted for the Reader Berlin and Odd Voice Out competitions. She has an MA in Creative Writing from Leeds, was a 2015 Jerwood/Arvon mentee and the 2017 Bridge Awards Emerging Writer. Her unpublished novels have come second in the Yeovil, been long-listed for the Caledonian, Bridport and First Page prizes and shortlisted for the Flash 500 competition. 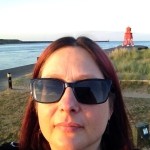 In response to Genesis 19

I have left the cave and am walking across the desert now. I will be able to walk a long way in the dark, while it is cool, too far for you to follow me when you wake with the heat and light. I’m not exactly sure of the direction, but hopefully I’ll end up back in Zoar.

I have taken a little goat cheese, your sandals, a blanket and enough water to last me half a day. I wrapped them in my head cloth which I hid under my bedsheet before lying there, anxious, waiting for you and Father to fall asleep.

Zoar seemed like a good town to me. I don’t know why Father was so afraid of it. I think I will be safe there, and as happy as is possible now. We could have been happy there together.

You can tell him why I’ve gone if you want to, or don’t. I don’t care. I stopped caring about him shortly after I realized that he doesn’t care about us. As you know. I’m sick of telling you. I’m sick of hearing what a good man he is, what a noble bloodline we are honour-bound to continue, that what he decides must be right, so we have a duty to follow his instructions, whether we understand them or not. I wish you were with me because I miss you and also because I wish you were not with him.

Don’t you remember what he did back in Sodom? You can’t have forgotten. Perhaps we remember it differently. This is what I remember:

First he introduced us to those two middle-aged men, saying that they had good trades so we were going to marry them. I was too young to understand, but you started crying straight away. He left it to Mother to explain what being married meant. And then I cried too, every bedtime, because I knew I had less than a year before I’d have to let that great big man do those things to me.

Thank goodness that didn’t happen in the end, at least. What did happen was so much worse and it was his fault. In fact, it could have been even more awful.

He should have left those two visiting strangers to sleep in the square, not brought them to our house. He made Mother prepare a meal for them with the last little bit of flour we had. We sat against the wall, hungry, silent and frightened, watching them eat.

When we were just about to go to bed, those noises began: shouts and bangs through every wall. Mother held us and let us cry into her skirts. We’d been brought up on terrible tales about those Sodomite men, hadn’t we? Father must have known he was luring them to our home by taking in those two strange men. They would have left us alone if it hadn’t been for them. They always had done before.

Father left us with those strangers while he went out among the Sodomites. I thought they were going to tear him apart. We listened behind the door.

We heard him say, quite calmly, ‘No, my friends. Don’t do this wicked thing.’ They roared. I was worried for him until he added, ‘Look, I have two daughters who have never slept with a man. Let me bring them out to you, and you can do what you like with them.’

My blood went cold. I grabbed onto Mother’s skirts in the hopes that she’d save us. When I looked up at her face, I saw she was crying and understood that she couldn’t.

Father kept talking, saying, ‘But don’t do anything to these men, for they have come under the protection of my roof.’

What about us? Weren’t we under his roof? Didn’t we deserve protection?

There was more shouting outside then. The townsmen threatened to do awful things to Father. I didn’t care anymore whether they did or not.

They banged on our door, so we ran back from it. The strange men that he’d found in the square ran towards it though, opened it – and for a terrified second I thought they were going to invite the mob in to attack us – pulled Father back into the house and shut the door.

I sometimes wish they hadn’t. Why are you so sure that his family line is worth continuing? Shouldn’t we stop his bad blood now?

The desert is cold at night. I knew it would be, that’s why I brought the blanket. I’m wearing it wrapped over me as a cloak. It’s colder out here than I’d expected, though. One blanket isn’t enough. That cave sheltered us more than I’d realised.

I felt sick when I woke this morning, and my breasts are aching, so I think I am carrying like you. Don’t expect me to start rejoicing the way you did. Hopefully, the trek across the desert will be too hard for the baby. Maybe I’ll fall down a deep dune and lose it that way. I won’t cry if that happens; that’s when I’ll rejoice. Or perhaps I’ll run out of water before I find Zoar, or a tribe of nomads, or an oasis, and if that happens then my death will kill his heir too, and I won’t even mind too much about that.

I know how our story will be told. The chroniclers have decided that our father is blessed and holy, so they’ll say that it was our idea, pretend the older daughter said to the younger, ‘Our father is old, and there is no man around here to give us children—as is the custom all over the earth. Let’s get our father to drink wine and then sleep with him and preserve our family line through our father,’ as though it’s us who’ve been making him drink wine, not him raging when he’s without it, hitting out and pinning us down when he has it.

If I get to Zoar, I will go to the far side of the city, and then another hundred steps over the plain, to see if Mother is still standing there, solid as salt. Then I will look back to where our home was. I wonder what, if anything, is left. The sulphur smell was so awful and the heat from the flames so strong that I don’t suppose there’s much but blackened sand.

I’ll never forget how we stumbled, running away through the damp dawn, dodging sharp grasses in our bare feet, Mother just ahead and Father beyond her. We all faced the way we were going, terrified to do anything else. The sky behind us whistled.

Mother slowed down and put her hand out behind her, waiting for us to catch up. We had nearly reached her when the explosion erupted. All that noise. We flinched. Mother bowed forward slightly and her head whipped round, only for a second. My stomach dropped.

All of a sudden, a white pillar was in her place.

You fell forward, crying, crawling towards her. I stood still and stared.

We had to pass her, trailing fingers on her grainy texture, smelling her new briny scent.

We have been alone in the world, unprotected, with only each other to trust, ever since.

I wish I was not creeping out in the middle of the night, leaving you to wake and wonder. I wish I had a way to explain this to you. Instead, this letter will have to stay in my head because in the cave we have nothing to write on and nothing to write with, even if I had ever been taught how, and if you knew how to read.